How Leonard Cheshire went from RAF pilot to humanitarian

In 1948 Group Captain Leonard Cheshire was a former RAF pilot who was struggling to adjust to civilian life after World War II. His exploits in wartime had made him famous, but life was not easy.

He set up an experiment in ‘self-help’ living at his home in Hampshire, called Le Court. This experiment soon failed and collapsed in debt. People moved away and Leonard was left sorting out the aftermath until a telephone call from the local hospital changed everything.

On 22 May 1948 he took into his home Arthur Dykes, an ex member of his community who was dying and had nowhere else to go. With no money, Leonard nursed the man himself and the two men became friends. Arthur was convinced there were more people like him in need of a home and soon word spread.

By the summer of 1949 Le Court had 24 residents. Referrals came from the new NHS hospitals already struggling to cope with waiting lists. Disabled people were at the very bottom of the list, often left on geriatric wards, and as Le Court became established, people from different parts of the UK and then the world began to rally to Leonard’s cause, in response to local need.

Leonard’s work became a Trust in 1951 and continues as the charity Leonard Cheshire to this day. Leonard remained a trustee, with the position of Founder, up until his death in 1992. He founded other charities in his lifetime, including Ryder-Cheshire with his wife, Sue Ryder and the World Memorial Fund for Disaster Relief, famous for staging The Wall- Live in Berlin concert in 1990, after the fall of the Berlin wall.

Click Spotlight On to find out more about the life of Leonard Cheshire and other stories from our archive. 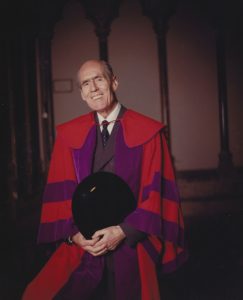