You are here: Home Spotlight on… Barbara Lloyd Evans

Barbara Lloyd Evans (born Barbara Beasley) lived at Le Court Cheshire Home from 1958 until her death in 1984. During these 26 years, Barbara was integral to the development of community life at Le Court. She served on various committees, helped produce publications including The Cheshire Smile magazine and the monthly Le Court newsletter and gave lectures, including on social work teaching courses. These were vital tools in developing and maintaining relationships between the home and the wider community. She campaigned for greater representation of disabled people within the management structures of Le Court and raised awareness of the lives of disabled people through her involvement with the Le Court Film Unit. In 1974 she married fellow Le Court resident Norman Lloyd Evans. 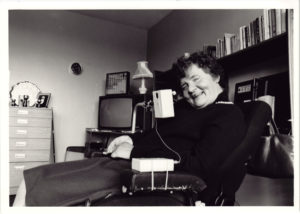 Barbara was Vice-Chairman of Le Court’s Residents Association and she played an active role in advocating for resident involvement in managerial affairs. Up to this point, Cheshire Homes were managed by a committee of local volunteers which did not include residents. Between 1963 and 1964 the Le Court residents’ calls for greater participation in management were discussed in a six-part series in The Cheshire Smile, called ‘The Role of the Residents’. Barbara shared her thoughts to the magazine, asking the question ‘How much responsibility are the residents going to have?’ (Cheshire Smile, Winter 1963).

Barbara believed that resident representation on the Management Committee was a natural progression from the minor roles residents already had in the homes. Barbara argued that residents would benefit from gaining greater responsibility and that they would provide expert insights to the committee, saying ‘who can know better about the problems of the disabled than the disabled themselves’ (Cheshire Smile, Winter 1963). The Cheshire Smiles debates eventually led to residents becoming part of Management Committee meetings.

Barbara recognised that progress was dependent on the collaborative efforts of disabled and non-disabled people and was steadfast in her efforts to raise awareness about the barriers to disabled people’s full participation in society. One example is in 1966, when alongside fellow Le Court resident (and Cheshire Smile editor) Frank Spath, Barbara represented the Leonard Cheshire Foundation at the British Trade Fair in Norway. Both demonstrated bespoke assistive devices to attendees, which included international Heads of Government, and Barbara later wrote:

‘To have disabled people as representatives, especially if they could move around under their own steam in electrically powered wheelchairs, was imaginative and progressive and undoubtedly did more than anything else to fix the Foundation in people’s minds.

We hope they went away with some thought as to the kind of life disabled people might live if the problems are tackled vigorously enough. Such people are part of the machinery of government; they can certainly piston the wheels if so minded’. (Cheshire Smile, Autumn 1966)

In 1967 she delivered a lecture ‘How being disabled alters one’s relationship with other people’ to a group of Social Work students at Croydon Technical College. This is just one example where Barbara worked to inspire future care leaders, broadening their perspectives on working with disabled people.

Barbara was a founder member of the Le Court Film Unit, established by Neville Thomas in the early 1950s. Barbara was the only woman in this co-operative of four residents and was secretary, scriptwriter and narrator. While softly spoken in her narration, Barbara wrote thought-provoking scripts prompting viewers to reflect on their own preconceptions. 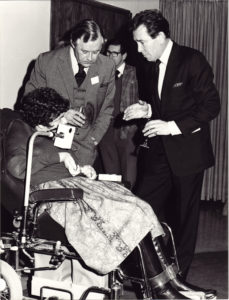 In the closing section of ‘Challenge’ Barbara identified the role of society in creating ‘challenges’ for disabled people. At this time, disability was still viewed by many in an individualised medical manner. The film was provocative by demonstrating an alternative way of thinking:

‘Disability is a challenge to society too. Are we going to accord disabled people full rights as human beings, or by treating them as second-class citizens, make them so?’

Barbara’s words resonate with the Fundamental Principles of Disability produced by the Union of the Physically Impaired Against Segregation (UPIAS) and The Disability Alliance in 1975. The publication of the ‘Fundamental Principles’ was a pivotal moment in disability politics, representing a radical new agenda led by disabled people. These philosophies later became known as the social model of disability and changed the way disability was described and understood. Barbara’s words in ‘Challenge’ foreshadow this landmark publication.

Barbara’s contributions to life at Le Court and her contribution to debates about disabled people’s lives cannot be understated. A common theme throughout her work was her determination to change attitudes about the kinds of lives disabled people could lead. Her efforts to push the boundaries of what life in a residential home could be, and to confront society’s role in producing disability are significant contributions to disability history in the U.K. I have provided a snapshot into Barbara’s life, but you can read more about her by exploring the archive: