The 13th February is World Radio Day, so what better time to put the spotlight on the Cheshire Homes Amateur Radio Net. 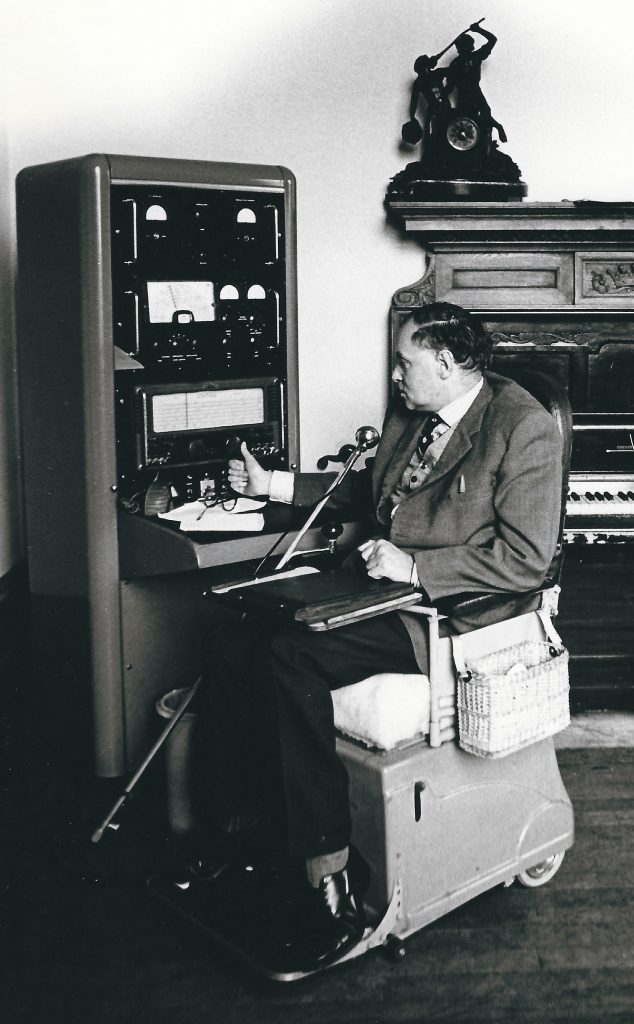 The Cheshire Homes Amateur Radio Net was founded by Ampthill House resident Tom Dugdale in 1960, described in the Cheshire Smile as an ‘electronics expert’ from Cheshire.

In the 1950s, Tom had been building radio sets and helping residents in other Cheshire Homes to study for and pass their Radio Amateurs Examination by correspondence course. This examination was needed in order to get a licence to transmit. In 1955 the first radio link was established between Ampthill and Staunton Harold Hall Cheshire Homes, and by 1960 there were residents in four homes across the UK on the air.

Between 1969 and 1973, 15 homes were given short wave radio receivers and a fund was set up to provide more equipment, literature, licence fees and encouragement to members of the Net. Homes were helped by local radio clubs and the charity RAIBC  to get training, equipment, Morse and technical instruction and to set up their own local radio stations.

In 1966 Tom Dugdale was presented with the Mullard Award from the Radio Society of Great Britain  for his work setting up the Cheshire Homes Amateur Radio Net. He wasn’t the first resident to get this award – Graham Thomas and Enid Bottomley had been presented with the same award in 1961 for their work setting up St. Teresa’s Radio Station. It is clear from the regular updates written by members of the Net in the Cheshire Smile magazine, that it was a thriving network, with particpants benefiting from the ability to learn a new skill and friendships made across the airwaves.

After Tom’s death, the Net moved from The Hill to Staunton Harold, who in 1977 appeared on the BBC1 TV Series the 60/70/80 Show. A member of the Net from Romsey said “how ideal it was for those who had a basic knowledge of electricity and radio, or keenness to learn…the examiners are very sympathetic towards the disabled and where necessary do the exam orally.”

You can read more about the Cheshire Homes Amateur Radio Net in the Cheshire Smile Magazine on this website. You can start with Graham Thomas’ account of setting up the Net in 1960 here.