You are here: Home Spotlight on… The Le Court Film Unit

In the early 1950s, Neville Thomas, a resident at Le Court made a black and white silent film about the day-to-day life at Le Court, and the move from the old Le Court house to the new purpose-built Le Court building. This film was At Home with Le Court, and was used by Leonard Cheshire when he visited India in the 1950s.

In 1958 four residents of Le Court Cheshire home formed a co-operative film unit known as the Le Court Film Unit. All members were disabled people and had an honorary adviser who had worked at the BBC. 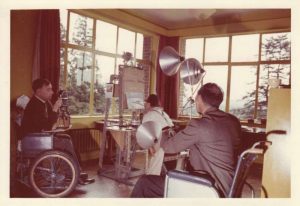 Neville Thomas and Lawrie Mawer were able to operate the cameras and recording equipment, whilst Brian Line was the sound technician and, along with Neville, cut and edited the films. Barbara Beasley, as the final member of the group, was a script-writer and narrator.

The group made 4 films in total:

The first award-winning film, Living Proof, took four years to make and was funded by jumble sales and dances organised by the members of the co-operative. It cost £150 to make. This film won a Three Star Award in the Amateur Cine World competition in 1962.

The second film was No Limit and focused on the special gadgets designed by local volunteers to help the residents at Le Court in their day-to-day lives. This film cost £275 to create, and was funded by a charitable foundation. No Limit won a silver cup at the International Film Festival on Rehabilitation in 1964. 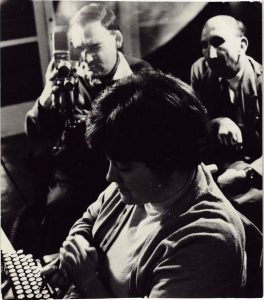 The third film, Challenge, took the film unit out of the confines of Le Court and they were able to record certain sections of the film at Mary Marlborough Lodge in Oxford. The film focused on the comparisons between day to day tasks for disabled and able-bodied people.

The Unit continued to make films until 1968, and the final film, Words Without Hands, focused on the challenges of writing and communicating for people with disabilities. This showcased a range of gadgets and devices used at Le Court to help people read and write. This film was narrated by Robert Robinson, and was commissioned for the Paralysed Committee of the National Fund for Research into Crippling Diseases. Read a Spotlight on… article about Words Without Hands here.

Brian Line went onto become a professional film maker in his own right and, along with young film-maker Nick Dance, produced several films relating to Le Court and disability after the Le Court Film Unit came to an end. These included Maybe Today – a musical documentary about the building of a new wing at Le Court; and Challenge – which was a documentary about the Le Court Film Unit.

As part of Rewind, we have recorded an oral history with Nick Dance to find out more about his experiences of working with Brian Line and his visits to Le Court. 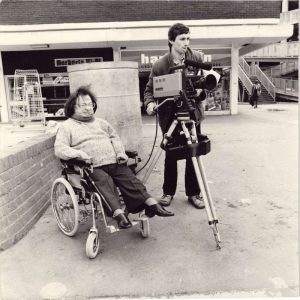