You are here: Home Spotlight on… A Top Secret D-Day mission

On a night time sortie, Wing Commander Leonard Cheshire flew an Avro Lancaster aircraft as second pilot to Squadron Leader Les Munro as part of Operation Taxable. It was one of the most important missions that RAF No. 617 Squadron — the Dambusters — carried out. Later, Leonard remembered it as a long operation calling for a high degree of precision flying. Much of the success of D-Day was dependant on their accuracy.

Taxable was set up to convince the Germans that the Allies’ military strength was greater than it actually was. It would also fool enemy radar that Royal Navy ships were heading to Cap d’Antifer, some way from where the D-Day landings were actually planned in Normandy.

The squadron were trained to fly in a square formation with pinpoint accuracy at 180mph for five hours and drop metal strips which resembled a real sea-borne fleet.

Les Munro said, ‘I considered this operation to be, in one sense, one of the most important that 617 squadron carried out. Not because of bad weather, not because of any risk of enemy action and not measured by any visual result, but because of the very exacting requirements to which we had to fly and navigate. There was absolutely no latitude for deviation from ground speed, compass bearing, rate of turn and timing.’

Four months after Taxable, Leonard Cheshire was awarded the Victoria Cross for sustained bravery throughout his war career.

In 1948, he began the charitable work which would become charity Leonard Cheshire. Our founder, like many people of his generation, was deeply affected by the loss of life caused by the Second World War, and wanted to work towards a lasting peace.

His determination to make sure that disabled people are equally valued came from that understanding and that is still our cause today. 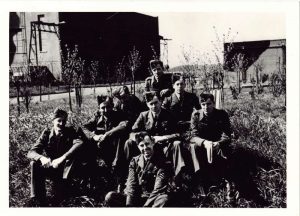 Find out more about Leonard Cheshire’s famous RAF career in this blog written by the Historian of RAF 617 Squadron.